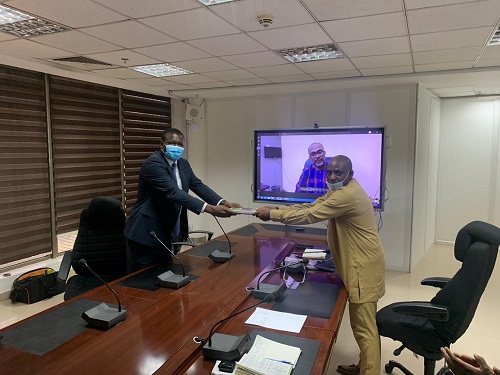 The Nigerian Content Development and Monitoring Board (NCDMB) on Wednesday received the implementation report on the school-based deworming programme it sponsored in Adamawa, Borno and Yobe States through the Aisha Buhari Foundation (ABF).

The National Coordinator of the Foundation, Dr. Mohammed Kamal Abdurrahman submitted the report to the General Manager, Research, Strategy and Development (RSD), NCDMB, Mr.Abdulmalik Halilu at a brief ceremony at the Board’s liaison office in Abuja.

The target of the Board’s support to ABF was to eradicate schistosomiasis, a neglected tropical disease amongst children between the ages of 5-11 years and to improve the nutritional status of pregnant women.

The Executive Secretary of NCDMB, Engr Simbi Kesiye Wabote participated in the meeting via the virtual platform and he remarked that the Board supported the programme because of the direct linkage between healthcare and nutrition of children and their mental development and contributions to the economy in their adulthood.

He remarked that the Board’s intervention led to the donation of Folic Acid and Iron Supplements to 12,500 Pregnant Women and mass administration of Praziquantel Drug among school children for treatment of Schistosomiasis in Adamawa, Borno and Yobe States. A total of 243,776 children were administered the drug, with Adamawa having 100,778, Borno, 120,146 and Yobe 22,852. 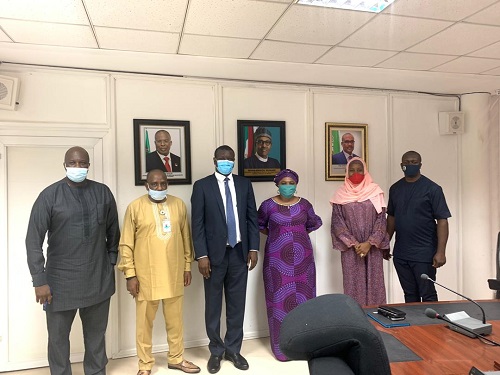 Other accomplishments included the donation of 55,000 packs each of Ribena, toothpaste and toothbrushes to improve oral hygiene among pupils, development of a collaboration model and establishment of working relationship between the Board, the foundation, Federal Ministry of Health, World Health Organization (WHO) and State Ministries of Health on accessing logistics, training, communication and administration of drugs to combat Schistosomiasis on an ongoing basis.

He highlighted the multidimensional nature of the project, including the impact on children’s educational performance as well as the health benefits to school children, pregnant women and unborn babies.

”In addition, this project aligns with national and global priorities as well.”

Making a presentation, the Programme Manager, Dr Omole Ukwedeh revealed that the Board partnered ABF in 2018 with a view to supporting government’s efforts towards improving child survival in the North East. She clarified that Borno, Adamawa and Yobe were selected because they were the most affected by insurgency.

She also explained that parasitic worms, Schistosomiasis and Soil Transmitted Helminthiasis are types of Neglected Tropical Diseases (NTDs) that are endemic in Nigeria, especially in the North East.

According to her, these parasites have a detrimental impact on child health as they deplete nutrients in children and adversely affect physical and cognitive development, causing symptoms such as abdominal pain, anaemia, bladder and liver diseases.

Recalling their experiences while executing the programme, Ukwedeh said they were impacted by insurgency in Yobe State, reluctance of the populace to accept drugs in Borno state and communal clashes and difficulty to access some areas in Adamawa state.

She pleaded with NCDMB to continue its support for the programme, adding that it was important to carry out follow up treatment for two consecutive years to achieve elimination of Schistosomiasis in target communities.